The co-authors of Invasion of the Prostate Snatchers, blog alternate posts weekly. We invite you to post your comments.


Many of you may have noticed that the Prostate Snatcher’s Blog has been temporarily on hold.  Ralph Blum, my coauthor of the Blog, passed away in March at the age of 84.  Ralph underwent surgery for a non-prostate-cancer-related abdominal problem and unfortunately was never able to recover.


This has been a sad time for me.  In fact, I needed the last couple months to get my emotions settled down before restarting the Blog.  Ralph called himself a “Refusenik” due to his strident stand against unnecessary treatment for prostate cancer.  Refusenik is a Russian term that describes individuals who fight the establishment.  Ralph was certainly a prostate cancer Refusenik. Ralph didn’t only talk the talk; he walked the walk.  By the time I first met him, he had already been monitoring his untreated prostate cancer for 11 years with PSA testing and an early type of prostate MRI scan technology.  At our first visit in 2001, he flew in from Maui for consultation about beginning some form of treatment since his PSA had risen up to 18. After extensive discussions that went on for more than a year, he reluctantly decided to begin Lupron hormone therapy for 12 months.  That turned out to be an effective solution, stabilizing his disease for another 12 years.  In 2013, his PSA started rising again and he decided to undergo radiation, which he tolerated without difficulty. The story of Ralph’s journey through all the many mainstream and alternative treatment options is told in the book we wrote in 2010 and continued on the Blog.


Ralph and I spent many hours together working on the book project and writing our weekly Blog. The book writing process, due to my feeble writing skills included writing lessons for me.  He taught me the writing craft from the ground up.  He was a generally patient and apt teacher though we occasionally had some volcanic conflicts.  It was no surprise, considering how many hundreds of hours we spent together and that we are both opinionated.


Ralph led an extremely interesting life but he was never particularly talkative about himself. Most of our conversations were about the business at hand, our various writing projects. Too bad, because I think he could have shared many lively stories. Just to give you an example, one day I was talking with him about my deep and abiding respect for Winston Churchill.  He passingly let drop that he ate dinner with Churchill at his home in Chartwell!  At first I was disbelieving, but it turned out that Ralph was dating his daughter, and the old man wanted to know who she was seeing so he invited Ralph over for dinner for an inspection.  Ralph didn’t have any profound recollections about the experience except that Churchill was surprisingly short in stature.  I occasionally tried to plumb Ralph for more stories about his life, but he had very little interest in talking about himself.  I did learn, however, that his mother was a silent film star named Carmel Myers. Ralph once showed me a picture of his mother who was indeed quite a beauty.  She was so attractive in fact that Charlie Chaplin, who was also in the picture, was lustfully leering at her.


Ralph was trained by Margaret Mead as a cultural anthropologist. He also worked with Timothy Leary doing early research into LSD at Harvard.  He spent time in Italy as a Fulbright Scholar.  He received grants from the National Science Foundation and the Ford Foundation, and received a BA in Russian Studies and Anthropology.  Somewhere along the way Ralph learned to speak French (he lived in Paris for a time).  Besides also speaking Russian, I don’t know if he spoke any other languages.


After Ralph graduated Phi Beta Kappa from Harvard he traveled to Soviet Russia and wrote cultural reports published in The New Yorker between 1961 and 1965.  He also studied Soviet Cinema at Leningrad University.  He wrote for Readers Digest, Cosmopolitan, Vogue and Saturday Evening Post. He published three novels: The Foreigner (1961), The Simultaneous Man (1970) and Old Glory and the Real-Time Freaks (1972).  Both The Simultaneous Man and Old Glory reflect his involvement in early drug research.  He also won the 2011 Gold Medal from Nautilus Book in Wellness, Prevention and Vitality for Investigative Reporting in Invasion of the Prostate Snatchers.


Ralph was a special and totally unique person.  He and I were a rather unlikely match considering his generally bohemian lifestyle compared to my rather straight-laced, workaholic ways.  Even so, our differences had a counterbalancing, net-positive effect.  I am very grateful that Ralph approached me with the idea to write a book back in 2007.  He came up with its uniquely memorable title.  And while the book has no doubt benefited many people, Ralph benefited me personally in a remarkable way.  Without his mentoring I would still be the literary neophyte he approached back in 2007.  Instead, under his influence, he transformed me into a passable writer. Winston Churchill said, "We make a living by what we get, but we make a life by what we give." Ralph, thank you for everything you gave us.
Posted by Prostate Oncology Specialists at 5:29 PM 5 comments 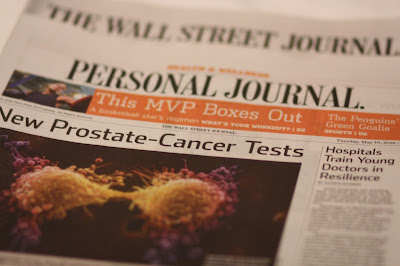 by @melindabeckWSJ   READ FULL ARTICLE HEREA BETTER PROSTATE CANCER TEST?Distinguishing aggressive disease from slow-growing tumors means more patients can forgo treatment.  Several new prostate-cancer tests aim to reduce needless biopsies and unnecessary treatments by sorting out harmless from aggressive tumors. 30 MILLION U.S. men will have a PSA test. 6 MILLION of them will be found to have elevated PSA levels.  1 MILLION of them will undergo a prostate biopsy.  180,000 men who have biopsies will be diagnosed with prostate cancer. Another 180,000 men will have prostate cancer the biopsy missed.100,000 men with prostate cancer will have low-risk tumors that are unlikely to spread or cause symptoms.  60,000 men with low-risk cancers will undergo surgery or radiation anyway, probably unnecessarily.

mpMRI vs BIOPSY
Mark Scholz, a prostate oncology specialist in Marina del Rey, Calif., maintains that an mpMRI can yield much of the same information as a biopsy and far less invasively. Low-risk prostate cancers barely register, he says, adding, “When patients find out they have a choice between 12 harpoon sticks to the prostate through the rectum or an MRI, they are on board big time.” Joel Copeland, 62 years old, has been monitoring his PSA closely for a decade; his two brothers were diagnosed with prostate cancer. He opted for an MRI instead of a biopsy when his PSA bounced up in 2013. “I don’t like needles, but that’s not the point,” Mr. Copeland says. “The point is, biopsies can cause infection and miss cancers.”

Mark Scholz, MD is board certified in medical oncology and internal medicine. He has been treating men with prostate cancer exclusively since 1995. He is the Medical Director of Prostate Oncology Specialists, Inc., and Executive Director of the Prostate Cancer Research Institute. He is an acknowledged expert on management and treatment for prostate cancer using hormone intervention, immunotherapy, chemotherapy and angiogenesis as well as vitamin, herbal and other forms of lifestyle counseling. His affiliations include St. John's Health Center, Marina del Rey Hospital and others. Dr. Scholz also served as an associate clinical professor in the department of Oncology at USC School of Medicine. Dr. Scholz volunteers for the Internet list “Patient to Physician,” found via Resources at www.pcri.org . You may also find current posts on twitter. www.twitter.com/markscholzmd

Ralph H. Blum is a cultural anthropologist and author, graduated Phi Beta Kappa from Harvard University with a degree in Russian Studies. His reporting from the Soviet Union, the first of its kind for The New Yorker (1961—1965), included two three-part series on Russian cultural life. He has written for various magazines, among them Reader’s Digest, Cosmopolitan, and Vogue. Blum has published three novels and five nonfiction books. He has been living with prostate cancer, without radical intervention, for twenty years.